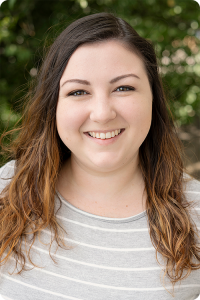 Ally Schachner is a Childcare Director for the YMCA, a role she began in 2021.

In her role, Ally is responsible for planning for the program and ensuring the students in our After School programs at the schools have a fun, safe environment where they can grow in spirit, mind and body. She also oversees the After School coordinators and counselors who work with the students each day.

Ally has a long history in the Y world. She grew up attending YMCA summer camps, and her first job was as a camp counselor at YMCA Camp Cherokee in Blacksburg, SC. In total, she spent ten years employed with Cherokee as a counselor and then Upper Staff member. On Upper Staff, she held the role of Counselor-in-Training Director and then Girls’ Camp Director.

Ally is passionate about education and lifelong personal growth & learning, and she hopes to inspire that in our young people and in the community. She believes that while traditional education is important, the small lessons and opportunities presented in our daily lives are so valuable and often overlooked. Ally says that a better understanding of our world and the people that inhabit it promotes growth, community, positivity, and love.

When she’s not at the Y, Ally loves to sing, read, and go hiking. She has also been trying to tap more into her creative side and has been working on a scrapbook of the time she spent out in California. Ally also says she’s a little obsessed with puns and really bad jokes (think: dad jokes), so give her your best dad joke when you see her.